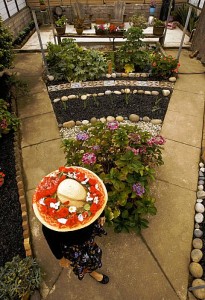 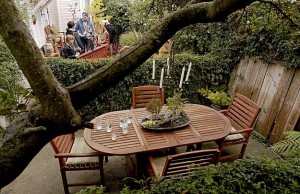 Neighbors streamed in and out of Ruth Wallace’s Portola district home Saturday, stopping to take in her impressive backyard garden, sip wine, munch on cheese, chat with one another and enjoy the cellist who was serenading the group with live music. It wasn’t just a weekend party.

Portola Garden Tour. In some ways it was the Portola district, once home to San Francisco’s flower nurseries, returning to its roots.Residents here will tell you that the Portola, just southeast of Bernal Heights, is one of San Francisco’s most under-acknowledged neighborhoods.Believed to have been named for Gaspar de Portola, a Spanish soldier and explorer, the once Jewish- then Italian-dominated neighborhood, has morphed in recent years into an ethnically diverse area where working- and middle-class families can still afford to live, and maybe even buy a home.

But the neighborhood has also struggled to find its identity, and in recent years, residents have undertaken a number of initiatives to breathe life and a sense of community into the area.

One of those projects is the garden tour, which began in 2007 as a fundraiser for the new library that was then being built. Wallace, a longtime San Franciscan who moved to the Portola in 2002, said she got the idea for the tour after she started gardening and realized how many of her neighbors’ yards were hidden gems in their own right.

“I got to see more and more, and found out how beautiful they are,” she said. “All of the gardens are closed off so you have to go through the houses to see them. It took a while, but I found them.”

The Portola has always been a good site for growing: In the 1920s, it became home to at least 19 nurseries, according to “San Francisco’s Portola” a book by Rayna Garibaldi.

The nurseries were family-owned – one by the Garibaldis – and grew the majority of flowers sold in San Francisco for many years. They flourished for decades, though many resorted to growing vegetables or raising chickens during World War II, and some were shuttered or relocated when landowners lost their property to the city for the creation of McLaren Park and the University Mound Reservoir system, Garibaldi wrote.

Today, many residents carryon the tradition behind closed doors. Carlin Decato, who was on Saturday’s tour with her 10-year-old daughter, Jaden, said she has been thrilled by the surprising handiwork of her neighbors.

“It’s proof you cannot judge a book by its cover,” she said.That was certainly true at Natasha and Todd Wertheimer’s Woolsey Street home, where Natasha transformed an underwhelming backyard into a beautiful landscape. ba-The Wertheimers, who rent the home and have a 2-year-old son, said Saturday’s event was a wonderful chance to show off her hard work and meet neighbors.

Richard and Rebecca Richards also invited neighbors into their intricate, Zen-inspired creation that he built from the ground up. It includes a bridge and decks, succulents, bamboo fountains, bromeliads and artwork.

This year’s tour will benefit the creation of a scholarship to San Francisco City College’s Environmental Horticulture/Floristry and Botany Department.The annual Portola Festival on San Bruno Avenue is today, and neighborhood leaders hoped that residents will participate in it, too. They also want the effects of the tour to last all year.

“I hope it has caused people to talk to each other more and swap stories and plants, and build community,” said Wallace.